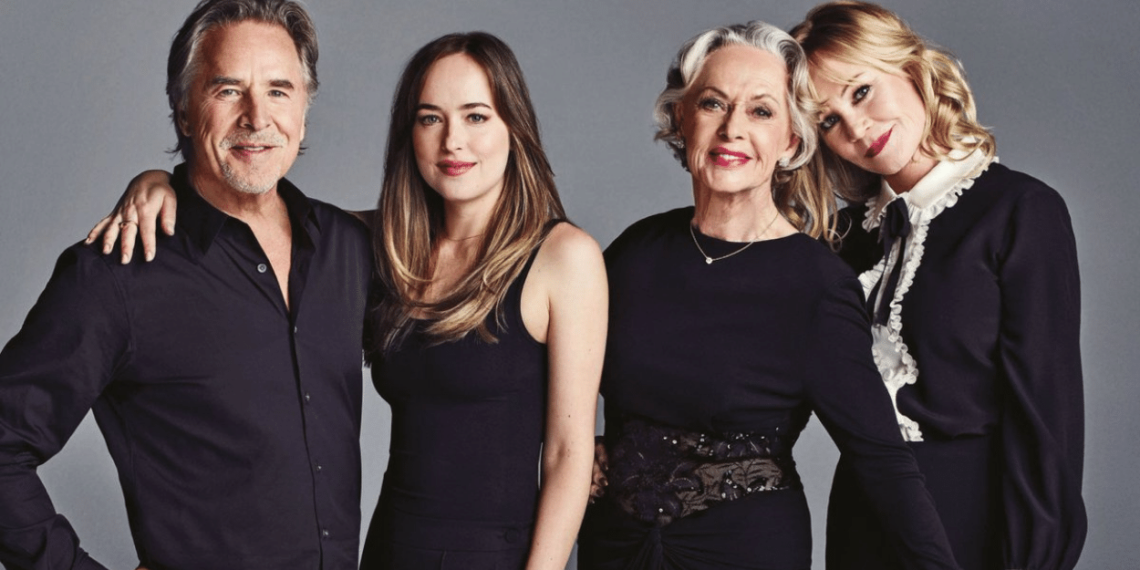 There is no doubt that Dakota Johnson is not only stylish and gorgeous herself, but both are in her genes. Belonging from the daughter of actor celebrities Don Johnson and Melanie Griffith, she has inherited a unique style and film potential.

Born on October 4, 1989, her looks and potential can be inherited from her grandmother of blonde Hitchcock Tippi Hedren, who was one of the most known figures in the cinema of the ’60s.

Her mother is considered to be the one who introduced power dressing from her role in Working Girl, with her innate 1980’s power dressing.

Dakota was raised in transit, with no one place to call a permanent home. The upside of this life was that it primed her for an unconventional life, which suited and catered her for her fame to come.

This was due to her parents being on the road, which Dakota being in the clutches of nannies and tutors, side by side somewhere.

She had to get therapy at the mere age of three, as her parents divorced, which was publicized, with heavily covered drugs and alcohol interference.

“I never learned how to learn the way you’re supposed to as a kid,” she says. “I thought, why do I have to go to school on time? What’s the point when you’re living in Budapest for six months while your stepdad films Evita and you go to school in your hotel room? I was a disaster, and I thought for so long that there was something wrong with my brain. Now I realize that it just works in a different way.”

Unfortunately, Dakota Johnson’s parents then ended their wedding relationship in 1996 with their announcement of divorce.

Don and Melanie tied the know in 1976 and parted ways in the same year. Fortune favoured their reunion again, and they reunited in 1989. It was this year when Dakota was born. After that time, Dakota had two younger half-sisters Stella Banderas Griffith and Grace Johnson.

Stella Banderas was born to Dakota Johnson’s mother and the famous Spanish actor Antonio Banderas in 1996, and Grace Johnson was welcomed in 1999 by her father Don Johnson and Kelley Phleger in 1999.

Dakota Johnson has six half-siblings: on her maternal tree, she has one brother, Alexander Bauer, and one sister, Stella Banderas; on her paternal tree side, she has three brothers: Jesse, Jasper and Deacon Johnson and one sister Grace Johnson.

Dakota’s family can be termed or coined as any other celebrity family which has such names in their lineage. Such blending is evident from Johnson’s personal life when she was involved in long-term relationships with her musician childhood beloved, Noah Gersh and then actor Jordan Masterson.

She then dated the lead vocalist of Welsh indie rock band Drowners, Matthew Hitt, irregularly for almost two years and then broke up until 2016.

She is now dating and residing in Malibu, California, since October 2017 with English musician and singer Coldplay frontman Chris Martin. It is to be noted that Chris Martin is a former husband of Gwyneth Paltrow and also the father of the rising star Apple Martin.

This adds further style and sparks to the already glamorous family tree of the Fifty Shades of Grey star.

Speaking of Dakota Johnson siblings, the sole daughter of Melanie Griffith and the famous Antonio Banderas, Stella Banderas has starred in the 1999 movie Crazy in Alabama and her parents. The movie was directed by Banderas himself.

23-year-old Stella is usually found in supporting health causes, such as mental-health resource Sweet Relief, or whether by participating in her label Madhappy by modeling.

She usually switches her hair between jet-black and platinum blonde as voicing her inner adventurous nature and message. As if by instinct or complimenting her star lineage, she prefers wearing branded apparel, as was noted in her 2020 Oscar’s gown. She likes Gucci as her go-to brand.

The 35-year-old Alexander Bauer is the son of Steve Bauer and Melanie Griffith. Unfortunately, he faced his parent’s divorce when he was only four. His parents divorced in the year 1987.

Jesse Johnson is Dakota’s older brother. Aged 39, he is an actor and was born to his parents Don Johnson and Patti D’Arbanville. His notable role has been playing John Wilkes Booth in the 2013 National Geographic Channel’s Killing Lincoln.

Jasper, full brother of Grace and Deacon Johnson, is not involved in the entertainment business. He is aged 19. Deacon Johnson is the youngest teenage son of Don and Kelley. This 14-year-old was born on his father and mother’s anniversary (April 2006).

Dakota’s half-sister from her paternal side and daughter of the Miami Vice actor Don Johnson and his second bride Kelley Phleger is Grace. 20, she is an avid fan of photography and is signed to a prosperous modeling agency IMG. Minimalist in style but complimented with boldness here and there, her personality is dominant by her apparel preference, which is also Gucci, and she has also accompanied her sister in the steps of the Met Gala.

With a height of 5.6ft or 1.71m, Dakota weighs around 52 kg or 119 pounds. Her body measurements are 34-24-34, with her shoe size 8 (US). Dakota is not only physically attractive and beautiful but also is smart mentally. She has an intuitive personality and a unique personality, which is evident when anyone meets her. Her dress size is 32 – EU or 2 – the US.

Dakota has an aura of mischievousness and naughtiness surrounding her. Accompanying this aura is the evident pleasure of being such a person. Perhaps this is because of her success in the talked-about franchise of Fifty Shades, which had turned her life around.

Her soft and caring personality is evident by her nature and the interviews she gives. “Nudity is really interesting for an actor,” she says in an interview with Vogue.

“Jamie and I worked so incredibly closely for so long. There were no inhibitions, and it was very honest, very trusting. But I mean, what a gamble…”, such is her personality. She claims to be terrible when in crowds. “… I have a thing with the exposure, with the experience of the past two years. I think I went into this weird K-hole of feeling so scared of people. I noticed myself becoming shut off to strangers, even cold. That’s not my nature. I prefer to be tender.”

Although Dakota’s decision to pursue acting cut her apart financially from her family but she remained strong in her career choice and now is reaching new heights. Presently, Dakota Johnson is the brand ambassador for the fashion luxury brand Gucci.

In November of last year (2020), she became a co-creative director of Maude, and an investor of it as well. Maude is a sexual wellness brand. She has also collaborated and is a strong advocate of protecting women’s rights and protection from harassment and gender discrimination.