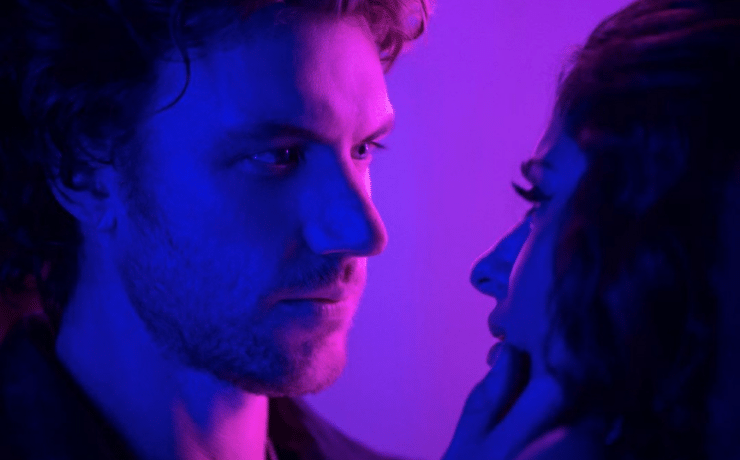 What do you know? Turns Out the Sex/Life Stars Sarah Shahi and Adam Demos Are Dating In Real Life!

Sex/Life, a binge worthy Netflix show, is all about the chemistry between its two characters. Billie Connelly (Sarah Shahi) fantasizes about her sexual experiences with her ex-boyfriend Brad (Adam Demos) as a way to escape her calm present reality in the suburbs in the series, which is based on true events.

If the actors’ relationship appears to be genuine, it’s because Demos, 35, and Shahi, 41, are a real couple. They met on the set of Sex/Life, which was shot in August 2020, during the COVID-19 epidemic.

Shahi told People that she was drawn to Demos right away (before she saw the full-frontal scene everyone is talking about).

During an interview with Oprah Daily, Shahi also shared another lovely memory from their early days together. This one happened during the table read for the programme, which took place in early 2020.

“I was seated between Mike [Vogel] and Adam, I recall. I was freezing, but Adam handed me his jacket, which provided me with a warm place to lay my hands “she explains.”We all hit it off right away. There was a feeling between us from the time we said hello.”

Shahi filed for divorce from her ex-husband, Shameless’ Steve Howey, in May 2020, months before Sex/Life began filming, according to People. They’d been married for 11 years and have three children: William Wolf, 10, and Violet Moon and Knox Blue, twins, who are 6 years old.

Sex/Life is an eight-episode series about a married lady named Billie, portrayed by Sarah, who is infatuated with her ex-boyfriend Brad, played by Adam, and their former sexual relationship.

A couple of things have been driving people insane on Twitter. One of them is whether Adam Demos is completely naked in the show or if the body parts we see are prosthetics. Another topic of discussion is whether or not co-stars Sarah Shahi and Adam Demos are genuinely dating in real life.

When the risqué job came into her life, the L Word actress was going through a divorce and wasn’t thinking about finding love again.

Shahi and Steve Howey had separated two months before after 11 years of marriage, according to an exclusive report from Us Weekly in June 2020. The divorce was formalised in January 2021 between the former spouses, who had three children: son William and twins Violet and Knox.

Shahi finished Sex/Life just a month before her divorce was completed. She pondered on how dramatically her life had changed in the previous few months at the moment.

“And that’s it for Billie Mann. @sexlife.” In December 2020, she captioned a series of images of her on-camera appearance with the phrase “my alter ego.” “I had the distinction of portraying the multifaceted, massively complex storm of a character. Wrapped in a sloppy pink bow, the saint and the sinner.”

“This show was more than just regular gig,” the Texas native continued. It shifted the course of my life. It let go of sections of my heart that had been suppressed for so long. It aided me in discovering my reality. I had been shattered open. Finally.”

The Person of Interest star reflected on her good fortune again when she celebrated her birthday in January 2021, remarking that her connection with Demos is one of the many “privileges” she’s been allowed as she’s grown older.

She commented on Instagram at the time, “It’s a privilege to wake up every day with enthusiasm for what the day COULD bring, to stare at Christmas lights and Halloween decorations with more astonishment than my kids.” “To become dizzy at the fragrance of freshly opened book pages. To have discovered my true love @adam demos, to laugh until the sun rises (sleep is dull), and to dance even when there is no music.”

When Shahi was celebrating her man’s birthday four months later, she gushed over him, marvelling at how two very different people could be such a perfect match.

“My baby… you’re worth everything and more,” Shahi wrote on Demos’ birthday post later. I’m going to celebrate you for the rest of my life.”

Sarah Shahi and Adam Demos Loved Filming the Show Together

After the project concluded in December 2021, both performers praised their Sex/Life collaborators and costars. “That concludes the most incredible job and experience of my life!!!” On set, Demos captioned a solo shot.

“This event was more than just another gig,” Shahi captioned a series of behind-the-scenes photos from the show. It shifted the course of my life. It let go of sections of my heart that had been suppressed for so long. It aided me in discovering my truth.”

While she spends the first season debating with herself about what she really wants — the sexless but picture-perfect existence she lives in the suburbs or the spicy, somewhat poisonous New York City affair — she appears to have reached a decision in the finale.

Billie declines her ex’s proposal and focuses on rekindling her romance with her husband. She appears cheerful till the very end, when she isn’t. She acknowledges it isn’t enough in the last scene, leaves her child’s play, and rushes to her ex’s apartment to tell him she wants to have sex.

Shahi and Demos Have Thoughts about the Ending of the Show

So can she have the best of both worlds?

“I believe that is the query. Can you have it all? That is the age-old question. Shahi, 41, told Us Weekly exclusively while promoting the show, “She’s a character that loves her life, but it’s not enough.” “She wants the stability of a relationship, as well as the danger and unpredictability that a relationship brings. She aspires to be a wonderful mother, as well as to go to school, earn a degree, and work. So, if we get a season 2, these are the subjects that ideally we’ll be able to dig into and explore.”

Demos, on the other hand, he’s not so confident it’ll work on Brad’s end. “Brad had a thing for her. That’s for sure,” the 35-year-old Australian told in an interview. “Who knows if we’ll be able to sit there?”

Shahi confessed in an interview that she jumped at the chance to play the more risqué character, adding that while she was a little “intimidated,” she wasn’t “hesitant” to display such intimacy.

“I’ve always wanted to be a part of projects like this. I was simply never hired. The L Word alum remarked, “Everyone would constantly hire me to be the tough girl and pay me to keep my clothes on.” “More importantly, I think once I realized this is a work written by a woman — all the authors are women, [it’s] directed by all women — it was just such an ability to stand for something, to stand for femininity, to have a voice in a way that I felt was really essential for women.

You can always be a mom and still want to be the sexual goddess at the very same time. You don’t necessarily have to lose one for the other.”

Her costars, she joked, made her life a lot simpler. The Rookie alum said of Vogel, 41, and Demos, “You’re only as good as your scene partner, and they’re just fantastic.” “They made my job a lot easier, plus they’re both attractive. So, I’d joke with my mother and say, ‘I’m going to work,’ and she’d respond, ‘That does not work because you’ve got to work with Mike and Adam.’ That isn’t what we call labour.’ … We had instant chemistry as a group.”

According to Sarah Shahi, her family life helped her relate to her Sex/Life role, according to Oprah Daily. “Billie has a lot of qualities that I can identify to. I am the mother of three children. Once you’ve been in a long-term relationship or become a parent, you begin to act as though the desires you had before having children have been suppressed “she explains.

On Valentine’s Day, Demos and Shahi became “Instagram official,” with Shahi referring to him as her “forever squeeze.”

While the second season of Sex/Life has yet to be announced, the first season’s finale suggests that Brad and Billie’s relationship is resuming. You know what it means: more quality time for the happy pair.